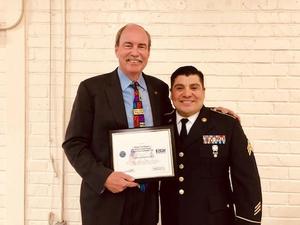 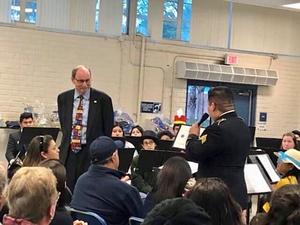 California High School Condor Entertainment Unit director Doug Nordquist on April 5 was honored with the Patriot Award by the California Employer Support of the Guard and Reserve (ESGR), a Department of Defense program.
The Patriot Award was created by ESGR to publicly recognize those who provide outstanding patriotic support and cooperation to their employees.
"It was quite the surprise," said Nordquist, who has been teaching in Whittier Union for 38 years, 23 of those at Cal High. "I make every effort to impress upon the kids the importance of patriotism through our responsibility of performing the National Anthem correctly with passion."
ESGR is a Department of Defense program that seeks to foster a culture in which all employers support and value the employment and military service of members of the National Guard and Reserve in the United States.
Nordquist was nominated for the Patriot Award by United States Army Reserve Sgt. Eric Villalobos, who serves as his assistant and is an alumnus of Cal’s music program.
"I was always supportive in his Army commitments and now in his reserve commitments as well," Nordquist said. "He was always welcomed when he came back."
For the past several years, the Cal High band has performed at the Memorial Day and Veterans Day ceremonies for the City of Whittier. This Memorial Day, the musicians will perform at the City of Whittier's ceremony and Rose Hills.