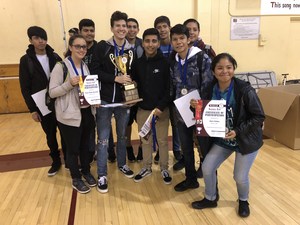 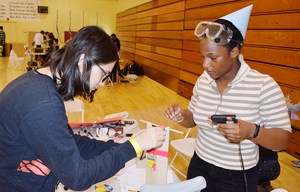 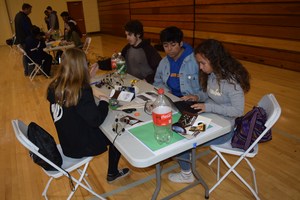 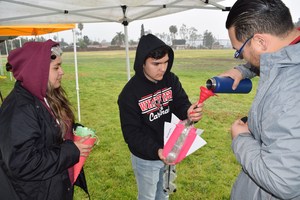 Whittier Union physics students stood on a wet athletic field at the Sierra Education Center as they watched their newly constructed water-bottle rockets blast into the sky and float back to earth, with their instructors nearby timing the descent. The objective for students was to keep the rocket in the air for the longest time possible.
The water bottle rocket test was one of three challenges facing the 60 competing high school students – 12 each from the District’s five comprehensive high schools – as they tested their mastery of physics during Whittier Union High School District’s inaugural Science Cup, held March 2.
After hours of competition, Pioneer High School emerged as champion, earning the right to display the Science Cup trophy for an entire year.
“The Science Cup presents a series of challenges for our students, which ideally will act as a springboard for independent research,” Pioneer High School physics teacher Matt Murray said. “For the inaugural Cup, we kept it simple, with hands-on science projects that the students could just come and build. Next year, we plan to expand the projects and have more students participate.”
La Serna, Pioneer, Whittier, California and Santa Fe high schools fielded 12-student teams for the day-long challenge, with three events that included racing mousetrap cars and building a complex Rube Goldberg-style machine.
When they arrived at the Sierra Education campus, students from each school split into three, four-student teams for the mousetrap car and water-bottle rocket competitions. Students received identical materials and one hour to complete their projects. The high school teams reunited in the afternoon to build the Rube Goldberg machines.
Water-bottle rocket competitors were tasked with propelling the rocket in the air and detaching a parachute made of plastic. The team that designed the rocket with the longest hang time was declared the winner.
“We have to adjust our water levels and air pressure, and the rain is also factoring into our equations,” Whittier High sophomore Noah Ramirez said after his team’s first trial run. “The parachute is not working as we hoped. We are going to fold it a different way before we try it again.”
La Serna took first place in the rocket event with a time of 5.78 seconds. Cal High swept the mousetrap car event, which was judged on how far the car traveled in a straight line. The Rube Goldberg machine winners, and the only team to complete a full circuit of the machine, was La Serna.
Whittier Union physics teachers from the five high schools – who meet several times during the year to focus on curriculum, instruction and assessments – have been working collaboratively to plan the event, which they envision to be the touchstone for the Whittier Union physics program.
The 2019 Science Cup will have a slightly different format, with more students participating, a new series of physics challenges and a science quiz tournament.
“Whittier Union’s inaugural Science Cup brought the best out of our physics students, who got the opportunity to apply their knowledge to real-world scenarios,” Superintendent Martin Plourde said. “Our District physics teachers have done a tremendous job encouraging the students to pursue critical thinking and collaborative learning by creating a format that is rigorous and fun at the same time. Everyone is a winner.”