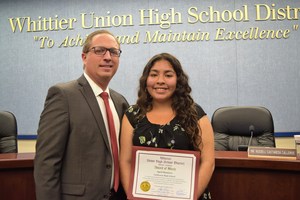 California High School senior April Ramirez was a happy, high-achieving Ceres Elementary School student who enjoyed spending time with her family when the unthinkable happened – her father was diagnosed with cancer and passed away when Ramirez was just 9 years old.
Dedicating herself to a life of great accomplishments, Ramirez enrolled in Cal High’s acclaimed college prep and academic support program, Puente, as a freshman, feeling that attending an elite university would be the best way to honor her father’s memory.
Set to graduate in June, Ramirez has feverishly applied to several four-year universities, gaining acceptance so far from San Jose State University and earning a full-ride scholarship to Whittier College. For her perseverance, the academic scholar was recognized on March 13 with an Award of Merit from the Whitter Union High School District Board of Trustees.
“Joining Puente has been an enormous help for me,” Ramirez said. “I want to thank Cal High for receiving me with open arms and helping me become a competitive student. There have been so many students who have worked so hard this year, so this is a great honor for me.”
Ramirez has been self-sufficient since elementary school, often staying home by herself to finish homework assignments while her mom was at work. The discipline fueled Ramirez to be more responsible in her studies and motivated her to take on leadership roles at Cal High.
In 2017, Ramirez was named Cal High’s Puentista of the Year.
“April has been a key member of our Puente cabinet, always ready to offer up ideas for fundraisers or social events, and she always follows through on whatever she says she will do,” Cal High English teacher and Puente Program lead Lori Davies said. “April is undaunted in her quest for excellence. It has truly been a privilege to watch her grow up over the past four years, and I know she will continue to thrive in college and beyond.”
Cal High’s Puente Program is recognized as one of the highest-performing Puente sites in the state, based on the number of students who have applied to and been accepted by four-year colleges.
In addition to taking rigorous honors and Advanced Placement courses, Ramirez has distinguished herself as a campus leader. She is a Link Crew leader, Academic Mentor, two-year member of the National Honor Society, California Scholarship Federation life member, vice president of the Interact Club and on Cal High’s Top 100 list for three years. She serves as a volunteer mentor at Ceres Elementary School’s Think Together after-school tutoring program.
Ramirez is mulling her college options as she looks toward a sociology or criminology degree.
“It is so great to see a student like April succeed. She is ranked in the top 20 of her class, even with all the challenges that she faced growing up after losing her father,” Cal High Principal Bill Schloss said. “She works extremely hard and gets things done. April will be very successful in her future and it feels good to know we’ve helped her, in some small way, to reach her goals.”